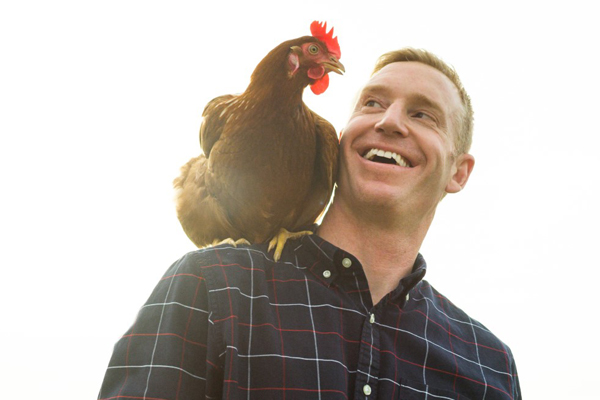 Where Will Bridge Take You?: Jesse Laflamme, Bridge 1999

We recently checked in with Bridge alumni to see where they are now. This is the fifth profile in a series from the article, "A Strong Bridge to Business Leadership" published on Tuck News.

Career
Owner and CEO of Pete and Gerry’s Organics

Jesse Laflamme loved the liberal arts education he received at Bates. But he got a little worried when he saw older classmates struggle to find their place in the business world, and he didn’t know what his Political Science degree qualified him to do.

He grew up on his family’s egg farm in Monroe, New Hampshire but hadn’t really planned to go back there to help run it. He saw a Bridge poster at Bates and decided to enroll the summer after his junior year.

Immediately, Laflamme knew he had made the right choice. “I remember calling my dad two days into the program, saying how much I loved what was being taught, and that I now loved business,” he recalls. “I’m not generally an excitable person, but I was genuinely excited about Bridge.”

His family’s farm had been struggling to survive, and Bridge gave Laflamme the confidence to try to turn it around. He started working there right after Bridge finished, armed with the textbooks he had just used, including one on accounting by Tuck/Bridge professor Clyde Stickney. He consulted that book when he began revolutionizing the accounting practices at the business.

At the time, the farm mostly sold mostly to small local customers, and had just a couple of employees and a few hundred thousand dollars in annual sales. Twenty years later, with Laflamme at the helm, the picture is vastly different. Now it has a national distribution network at supermarkets, and partners with 130 family farms. And it has 240 employees, $240 million in annual sales, and is considered one of the top-10 organic brands in the nation, alongside Horizon Organic, Stonyfield, and Organic Valley.

“I’ve used every ounce of my Bridge experience to build Pete and Gerry’s into what it is today,” Laflamme says. “I didn’t have time to get an MBA, so I would have been lost without Bridge.”